skip to main | skip to sidebar

A slow decline before a precipitous fall...

And then a revival. 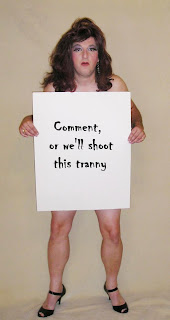 (This is a continuation of a blog posted at MySpace.)

I kinda got carried away this Labor Day Weekend. Friday night, I set up my apartment for a photo shoot. Saturday, I figured everything was still out, so I might as well take more pictures. Sunday, I was busy. No pictures. Monday, I didn't have to go into work until 5pm, so getting up at 9, I decided I had time for a few more pics.

And tonight, I look around, and my apartment looks like a Goodwill truck overturned.And I'm tempted to get dolled up for yet more pictures.

And why not? It's been seven months since I got dressed. It can be expected that when one pens something up, it'll come roaring back.So, that raises the question: Where have I been?

(That's from the MySpace blog. The deeper stuff starts now.)

About a year ago, I attended my first Southern Comfort Convention. I drank too much each night I was there, and was hungover each day, so I missed pretty much every seminar. I also met a lot of people, and instantly forgot many of them.

The day of the swimming pool party, I awoke to find myself feeling vaguely out of sorts. I wandered around the lobby for much of the day, but it seemed like no-one was around. Everyone was in the seminars, (most of which were TS oriented), or at the pool party. Eventually, I made my way to the pool, and my uncomfortableness was only intensified.

Yeah, I was jealous of the full-time girls, whether or not they were "hot". (There were a few who did look fantastic, and a few others who... well, shall we just say, I admired them for being comfortable in their own bodies.) I could have brought a swimsuit and joined in the fun, but I'm not comfy with my physique. Granted, I lost a lot of weight over the course of the previous year, but, that wasn't the only thing that bothered me.

Generally, I'm happy with being a guy. I'm not transsexual. I'm pretty sure of that. But I didn't feel like I fit in at all at SCC and specifically at the pool party.

And it's not just the physique: It's the whole social standing. Being a simple crossdresser feels so shallow sometimes. While TS's are talking about hormones and laser, coming out to family, and fears about job security, all I can contribute to a conversation is talk about clothes and photos. (Heh, that's ironic.)

It's as if TS's are adults, and as a crossdresser, I'm stuck in adolescence. And I don't like feeling shallow and simple. But, as they say, "college isn't for everyone", so if to "graduate" and grow, I have to go full-time, I'd rather skip even community college and stay in junior high. (How's that metaphor grab ya?)

But what to do? I can't stay in this arrested development forever, can I?

Okay, overstretched the metaphor, and probably insulted a few people in the process. But I don't know where else to go with all of this: this vacation from dressing was kind of nice, because it allowed me to rediscover some of the simple pleasures. And I do have some very intelligent crossdressing friends with whom I can have intelligent conversations. But, a deep conversation on many CD topics is still in shallow waters.

(Watch for the conclusion to this line of thought at TGForum.)

Ms. Rho
A portrait of the author writing about truth, beauty, freedom and love. But mostly, beauty.