skip to main | skip to sidebar

And I'm a hermit.

I've found myself either pushing people away lately, or just avoiding human contact as much as I can.

I broke up with an amazing woman, because, well, I got irritated when she was around for too long. I don't go out much anymore, if I can help it. (That covers both gender identities.)

Although, I was invited by the boss to a guys' night out last weekend, for an evening of an ultra-violent movie, beer, and poker. (To my surprise, I walked out with $25 I didn't walk in with.) It was a good night, but I only went because I couldn't find a sufficient excuse to ditch.

The reason I'm ducking interaction? On one hand, I'm tired of meeting new people and being disappointed. There are so many crazies out there, and they all seem to find themselves in my general vicinity. On the other hand, I'm shy anyway. (Although that may be a symptom and not an actual disease.) I don't have the patience for small talk. Either give me something to chew on, or move along with your discussion of what happened on "Dancing with the Stars." On yet another hand, there's a part that's afraid my Ronnie life will surface somehow in an otherwise innoculous conversation with those outside the know. (Ridiculous and lame.)

But let's cut to the crux of this rambling... 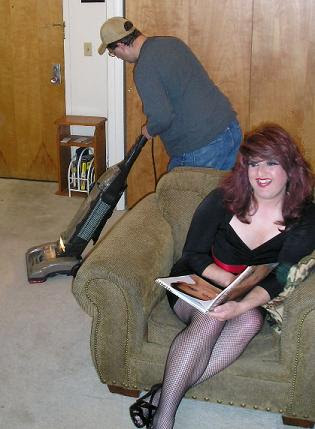 I've done some dressing and photo-taking, and bad photo-shopping over the last two weekends; the first since... December? New Year's Eve? Just said the hell with all the excuses for not shaving my legs, and not shaving my goatee, and did it. (Did it big time, if you care.)

It felt good, it felt nice. It let off some steam. But it didn't cure this overall anxiety, this angry ennui.

I'm happy to report that I didn't come out of it thinking "oh, I need to be on hormones, I need to be full-time", as sometimes happens.

So, let's drop the "gender" from the earlier declaration of what the crux is...

That leaves us with "identity".

And I don't feel comfortable with any which I've adopted. (And to be honest, what I've tried to construct online probably isn't much closer to the "real me" than anything portrayed in real life.)

Yeah, I don't know who I am. I don't know what I am. (The whole TG thing probably just complicates rather than causes.) I don't feel like I have anything I can hang my hat on. It's probably been exacerbated by the '08 divorce, and my dumping of my GF. I always feel like I'm defined more by whom I'm around. And now that I'm avoiding people, well...

I dunno, maybe no-one feels like they know who they are. Maybe I'm just whining. Probably just thinking about it too much. Need a project. Need something substantial, that's also almost a sure thing.

I produced a project for RiffTrax over the last few months, and now, I'm afraid to post it, because I'm afraid of the underwhelming response. (Kinda like the Ronnie Rho Show.) I may be happy with it (them) but apparently what I have to offer isn't what the market is interested in.

Here's a thought: The album "Flood" by They Might Be Giants is 20 years old this year. Sorry, but one of their tunes just came up on random, and that's been floating in my mind lately.

Really? Could this be simply a mid-life crisis? I am knocking on 40. Could I just be looking back, wondering what I've accomplished over the last four decades, and questioning the worth of my existence? Yup.


I should probably find myself a good therapist, but I'm not in a financial positition to spend money on someone who simply listens to me ramble. I can do that for free online. (And yes, here I am, nearly 40 and a couple of paychecks away from bankruptcy. But I try not to think about that.)

Oh, I got onto Twitter, from my guy personae, and was pretty well received, based in part upon my occupation. In fact, the following was so encouraging, I briefly considered reinventing this blog as one from "him" with more of a local angle, as those seem to do well in this market. But, I got in trouble at work, because I was tweeting so much it was distracting from what they pay me to do. Since then, I've essentially abandoned Twitter. That may have contributed to this anchorless state I find myself in. And truth be told, while I really, really liked Twitter, (it lent itself well to my bon mots), I haven't missed it.


Ummm.... run out of steam. So let me end with this: I'm drinking heavily 6 nights a week. Smoking about a pack a day, and I'm supposed to run a portion of the local marathon this weekend. Not good.
Posted by Ms. Rho at 7:13 PM

Ms. Rho
A portrait of the author writing about truth, beauty, freedom and love. But mostly, beauty.